The Highest and the youngest mountain range in the Europe, The Alps Mountain range features exceptional scenic beauty and is one of the strongest attraction for the global tourists to visit the western European nations. The paragraphs underneath will explore a few interesting facts about the Alps.

Covering France, Italy, Switzerland, Austria, Monaco and few other neighboring countries, the Alps cover a significant portion of the total land area in Western Europe. So far the statistics are concerned in this regard; it will be approximately the 20% of the total land in the region.

The Alps houses the highest mountain peak in Europe

Mount Blanc, the highest mountain peak in Europe, lies in the Alps Mountain system. It lies close to the international border between France, Switzerland, and Italy. The altitude of the peak is to the extent of 4800 meters above the level of the sea. In addition to Mount Blanc, The Matterhorn, Monte Rosa, and the Zugspitze are few of the famous Alpine peaks.

Unlike the mountainous regions in the other parts of the world, the Alpine region is one of the most densely populated regions in Western Europe, housing more than 14 million people. The major concentration of the population is around the valley areas. 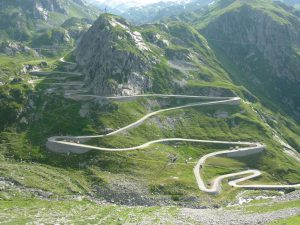 The Alps Mountain houses several international roadways that connect the neighboring countries. The Brenner Pass is the most frequently used path in the Easter Alps. This pass connects Northern Italy with Western Austria through a prime railroad and motorway.

The Alps is a reservoir of natural minerals

The Alps is a storehouse for natural minerals. A major portion of the total produce of Gold, Copper, Amethyst, and crystal in the Europe originates from the Alpine Region. As a matter of fact, the French Alp produces the major portion of the Copper, produced in France annually.

Each year, more than 100 million tourists visit the Alpine region from various parts of the globe. As a matter of fact, The Alps is one of the strongest attractions for the tourists to Europe. This had been the trend for several decades and it is prevailing even in today’s time.

The Alps feature extreme variation for vegetation and wildlife

People who have visited the Alpine region have been largely impressed by the heavenly scenic beauty of the place. It will not be an exaggeration if stated that the Alps have been generating a significant portion of the revenues from tourism for the western European nations. The memory of the visit to The Alps will endure in your mind for the longest span of time.

To the diehard fans of mountains, the Alps in Europe are a magical destination. Featuring a ravishing scenic beauty and mesmerizing landscape, the Alps attract over 120 million tourists from around the globe each year. View all posts by LesAlbiez